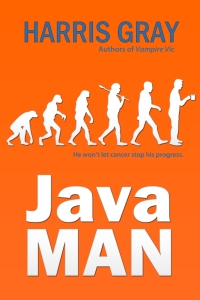 What do you do when a nightmare threatens your dream? In the disturbingly funny new novel from the authors of Vampire Vic, Brian Lawson receives a dread diagnosis: cancer. But he won’t spare a moment from saving his struggling coffeeshop, even if success comes with his dying breath.

Divorced and ostracized in the rural community, Andrea Goldine sets her sights on the charismatic java man. Brian’s doctors ravage him with chemo and radiation, yet the tumor on his shin grows. Brian drafts Andrea into his battle with a competing coffeeshop, desperate to tap the college campus’s retail gold mine. But Andrea yearns for a different partnership…

Passions simmer below the surface of the tight-lipped community. Fresh from prison, North Dakota’s legendary basketball goddess dangles a ticket to Brian’s campus coffee dreams, and a disgraced scientist’s toxin treatment tantalizes. Two miracles for two maladies—with one cure more deadly than the next.

Early readers of Java Man who know us wonder whether it is autobiographical for the 50% of Harris Gray that is Jason. (Hemi-autobiographical then.) They must be referring to Jason’s earlier days, before he settled down here in Colorado. But would Jason at any age do the things Brian does in Java Man? Make the excruciatingly poor choices, break down wailing in front of his customers, have that disturbing sex? Maybe. Maybe. But no, this story is fictional.

Sure, some elements are based on Jason’s experiences. The poor choices, the breakdowns, the sex, yes yes and…maybe. But the story, that is wholly made-up. They say nothing is truly new under the sun, that you have to get your ideas somewhere, and that writers write what they know. They are dead-on. You can be assured, however, that any Jason-based reality in Java Man was so thoroughly redesigned as to be unrecognizable.

The names, for instance. Neither of us knows a Charlotte nor an Edna. And the name of the coffeeshop, James River Valley Coffee, that is not the name of Jason’s actual shop. The front door is even in a different spot. The effect is a novel that is a highlight reel of Jason’s life, and yet nothing like it.

We are blue in the face from unequivocally stating this, and still the murmurings continue. It is as if we are being accused of a reverse-James Frey, pretending fact is fiction. But Frey made a killing embellishing his seamy underbelly in A Million Little Pieces. If even half the stuff in Java Man were true, of course we would have passed it off as an autobiography. We are saving for our RV writermobile, to tour the country writing, attending book clubs, and giving our wives shoulder rubs when the driving gets tedious. A guaranteed trip to the top of the bestseller list with a lurid autobio would top off our change jar and put our wives behind the wheel of that writermobile. And so clearly, Java Man must be fiction.

Of course, we’re not sure we could have made up that sex scene.

I won´t say what is going on in the book. Read the blurb and you get the glimpse of what is it about.

The book isn´t easy to read because of Brian´s disease. That subject always makes me sad, speechless and brings tears to my eyes.

But I know that I´ll definitely re-read this book.

>>>ARC received in exchange for an honest review<<<

The Story of Harris Gray 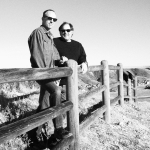 In the nook seat of Jason Gray’s coffee shop, Allan Harris wrote. And eavesdropped, as Jason told stories. One day Allan found waiting for him a little yellow notepad, crammed to the margins with Jason’s tales. Allan typed them, touched them up, and called it good. Jason had other ideas.

A collaboration began. The writer and the storyteller. As their tales converged and became inseparable, as they were fused by the stories they told…all the king’s horses & men can’t un-make Harris Gray again.

My Tweets
Join 4,099 other subscribers