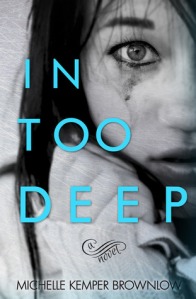 Title: In Too Deep

Gracie has just finished her freshman year of college in Memphis when she takes a job at a local pizza joint in her home town of McKenzie, Tennessee. She is the epitome of innocence when she meets Noah. Noah is unabashedly handsome, intriguingly reckless and just cocky enough to be sexy. Gracie’s instincts tell her to stay far away from him and based on the stories she hears from her co-workers he leaves broken hearts in his wake. But still, she can’t explain her fascination with him.

Noah puts aside his bad boy ways when what he thought was a summer crush has him unexpectedly falling in love. But soon after Gracie transfers to UT Knoxville to be with Noah, their unexpected love becomes riddled with anger, deceit and humiliation.

Jake, Noah’s former roommate and Gracie’s best friend, can no longer be a bystander. Gracie’s world falls out from beneath her and when she breaks she turns to Jake for strength. As Jake talks her through a decision she’s not yet strong enough to make, together they uncover a truth so ugly neither of them is prepared for its fallout. Will Jake pull her to the surface or is Gracie Jordan finally In Too Deep? 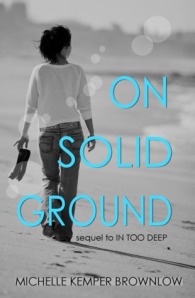 Gracie survived an emotionally abusive relationship that wrecked her. Her ex, Noah, systematically chipped away at her self-esteem through intimidation, humiliation and infidelity which left Gracie unable to trust her own perception of his intentions. But after falling head over heels for Jake, her best friend and the man who stood by her through it all, she is ready to experience life in the way it was meant to be lived.  However, Gracie may find it impossible to simultaneously heal from the trauma of abuse while navigating a relationship with Jake. Can she put her heart on hold in order to heal her soul?The sequel to the five-star debut novel, In Too Deep, chronicles Gracie’s steps toward healing as she falls deeper in love, reaches out for help, stands on her own, steps out of her comfort zone, faces her biggest fears, and reconnects with a sensual, talented soul from her past all in hopes of finding herself on solid ground.

In Too Deep Buying Links

In Too Deep and On Solid Ground Review

If I give each book 5 stars, that won´t be enough. Maybe 10, 15 or 20 will be enough to give these both books a credit and show how the story got deep inside of me.

But he was far from she expected him to be. He turned her life into a nightmare. And he was her nightmare because he was abusing her.

But there was him. Her saving grace. Her light at the end of the tunnel. Jake.

Even when the hard and emotionally heavy things got on the surface, he was there to help her.

Their relationship wasn´t always filled with hearts and flowers. It had it ups and downs, twists and turns. Good and bad days. It was challenged a lot of times.

But they both were able to overcome it all. Because deep down they loved each other underneath it all. With time, their love grew bigger and stronger.

Also, Gracie became stronger as a person. Yes, Jake was always there for her. But she had to do and overcome a lot of things by herself. She had to become stronger and more secure in herself, alone and for her own sanity.

One thing I really love is that we got to chapters in Jake´s POV.

Michelle wrote a breathtaking beautiful and raw emotional story that will always have a part of me.

I can´t say simplier than I loved it so much even though some scenes were hard to read.

>>>ARC received in exchange for an honest review<<<

Michelle Kemper Brownlow has been a storyteller her entire life. Her debut was on the high school cheerleading bus granting requests to re-tell her most embarrassing moments for a gaggle of hysterical squadmates.

Earning her Bachelor’s degree from Penn State University in Art Education and then marrying her very own “Jake,” she moved to Binghamton, NY where she taught high school. After having two children she quit work and finished her Master’s degree in Elementary Education at Binghamton University.

The Brownlow family of four moved to Michelle’s hometown of Morgantown, PA while the children were still quite young. A few years after moving, her family grew by one when they welcomed a baby into their home through the gift of adoption. The family still resides in PA, just miles from where that high school cheer bus was parked.

Michelle has been an artist for as long as she can remember, always choosing pencils and crayons over toys and puzzles. As a freelance illustrator, her simple characters play the starring roles in numerous emergent reader books published by Reading Reading Books.

“Writing is my way of making sense of the world. When I give my characters life on the pages I write, it frees up space in my mind to welcome in new stories that are begging to be told,” says Brownlow.

One thought on “Blog Tour – Review/Giveaway: On Solid Ground by Michelle Kemper Brownlow”